Hunt the magnificent Dall Sheep in August. This hunt is 14 days and requires the hunter to be in top physical condition. The overall size averages 36-37 inches, with heavy horn on most rams. Average overall age is 10 years old. Hunting elevation is from 5,000 feet to 7,000 feet. This is a horseback trip with a lot of hiking. Backpack trips can also be arranged. Hunters can also take a mountain goat on this trip. 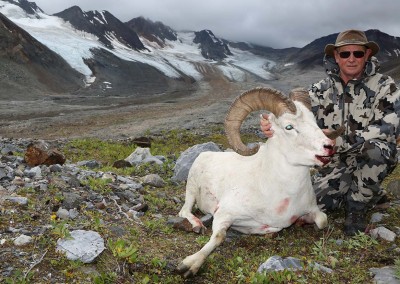 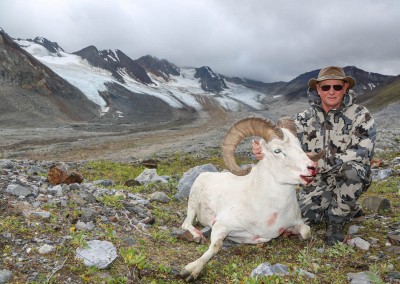 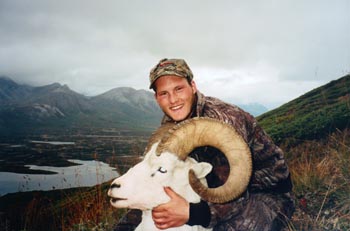 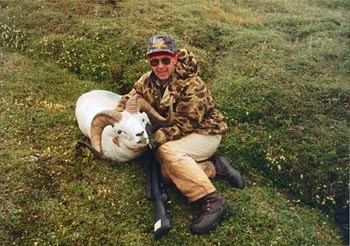 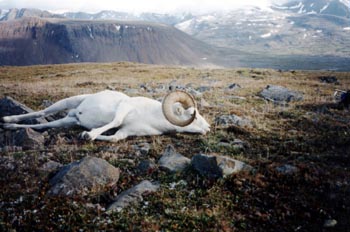 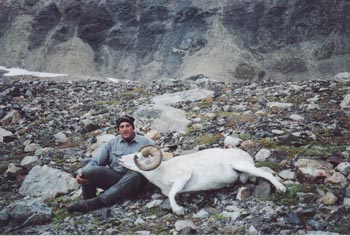 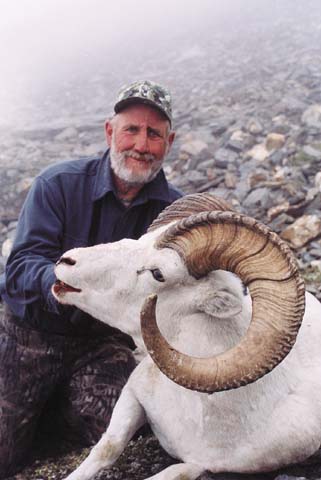 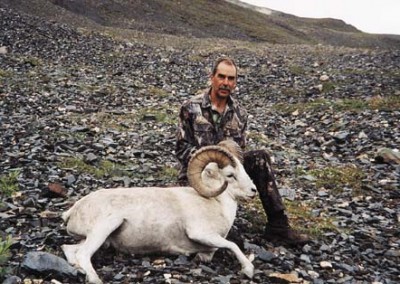 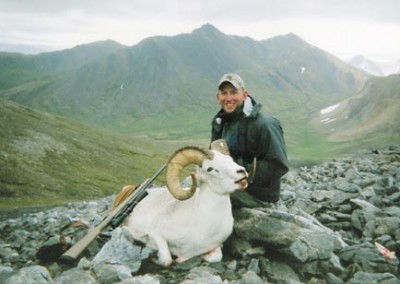 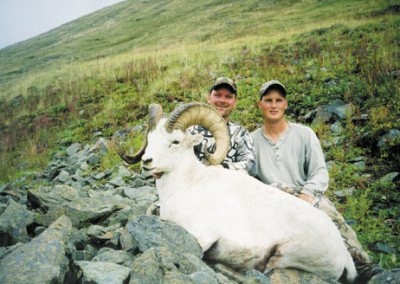 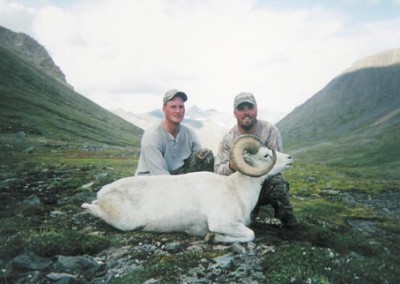 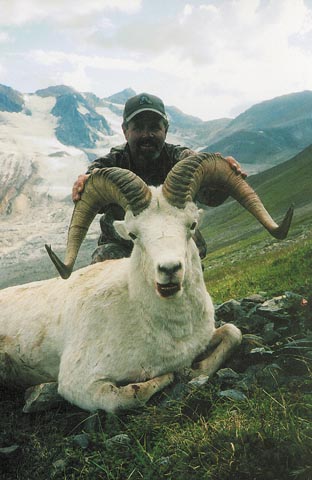 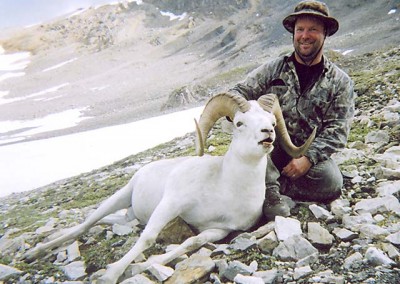 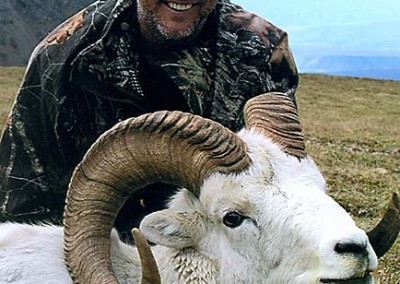 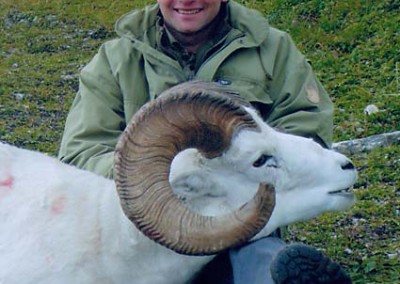 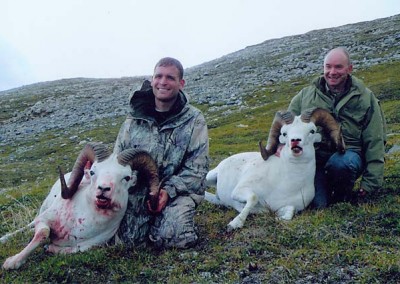 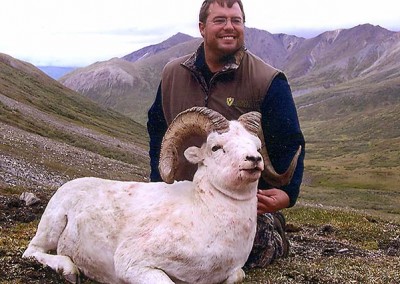 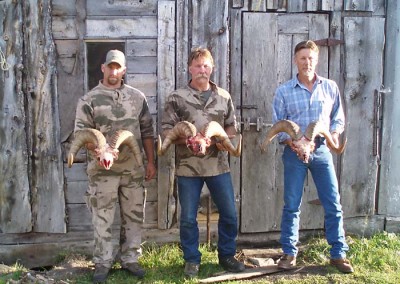 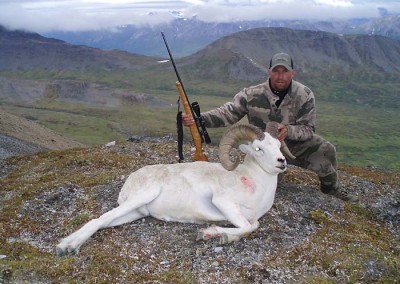 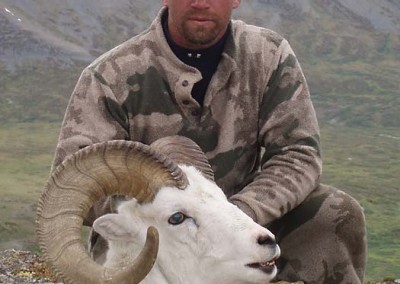 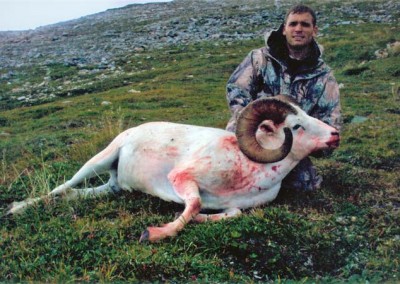 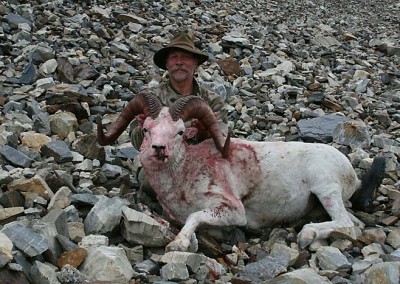 Both ewes and rams have curved horns. Ewes’ horns are gently backswept and quite short. Mature rams’ horns curve first back and down, then forward and up in a flaring spiral. The length along the curve of a ram’s horn can be more than one meter. Rams have much thinner horns than those of Rocky Mountain bighorn sheep, hence the name “thinhorns”.
Our northern mountain sheep are also lightweights compared to bighorns. Thinhorn rams weigh up to 115 kilograms, about two thirds the weight of bighorn rams. Stone rams are usually somewhat heavier than Dall rams and also have slightly longer horns. Ewes are a fifth smaller than rams and weigh only half as much.

MOVING WITH THE SEASONS

Thinhorn sheep spend the short northern summer grazing in high alpine meadows. During July and August they crop the choicest bits of grasses, sedges and juicy, broad-leaved forbs. They are building up fat stores to help them through the winter, when high quality forage doesn’t last as long as the snow and cold.

Come late August and September, thinhorns begin a leisurely move toward winter range that can be few or many kilometers away. They use the same migration routes generation after generation, drifting slowly through the high country, but hurrying across valleys that must be crossed. Once sheep leave the safety of rugged mountain terrain, they are open to attack by wolves, coyotes or grizzlies.

Wind-swept, south-facing slopes at fairly low elevations are typical thinhorn winter range, and sheep spend up to nine months there. Dall sheep usually stick to open grasslands above treeline while Stone sheep also make use of treed and shrubby areas. For both kinds of thinhorn, winter range must have scree slopes and broken cliffs nearby for escape routes and for spring lambing grounds.

Since sheep are grazers, they need to get at grasses and other favorite plants buried by winter snowfalls. They will dig in snow up to 30 centimeters deep, but rely on strong winds to sweep the slopes clear of deeper snow. Freeze-thaw weather and heavy, wet snowfalls can lock sheep food beneath a crusty barrier, which can have serious consequences. If ewes don’t get enough food energy during the winter, they don’t produce lambs and the population declines.

In spring and early summer, sheep often visit mineral licks to restock their supply of micronutrients lost during the long winter. They spend days or weeks near the licks before following the line of snowmelt and newly sprouted green shoots back up to alpine summer ranges.

Spring also brings lively new life to the mountain slopes. Pregnant ewes head for the lambing grounds’ steep cliffs in May and early June. There they stay for three to four weeks until all lambs are born. Then, together with their young, they climb to summer range once more.

THE SOCIAL SIDE OF LIFE

Thinhorn sheep are social animals that minimize squabbles within their ranks by sticking to a rigid dominance scale based on horn size. The ram with the largest horns tops the scale and treats all other sheep, regardless of sex or age, as subordinates. Every thinhorn has its place and things run smoothly as long as sheep don’t try to jump rank.

Rams aged three years and older band together and go their own way for most of the year. They often seek out higher summer pastures than ewes and young sheep, and mix with other sheep on winter ranges for only a month or two. Leadership clashes within the band can happen any time of year, but are fiercest during the rut in November and December. Young rams move up through the ranks very slowly and are five to seven years old before they have large enough horns to challenge a leading ram. Thinhorn rams aren’t as aggr-essive as bighorns, but top rams still put a lot of energy into defending receptive ewes from other rams challenging their dominance. These rams rarely live to 12 years, whereas ewes may reach 16 years of age.

Ewes, young rams and brand new lambs remain together throughout the year and have little contact with the ram band except during winter months.

Newborn lambs, weighing about three kilograms, race and frolic within days of birth but may fall prey to cold weather, accidents, or eagle attacks. They quickly learn to nibble choice grass shoots and to rely on their own fleet feet to escape danger. While watchful ewes graze and rest in a loose circle, the lambs within scramble up cliffs and slide down scree slopes, building strong bones and muscles and practising for the real escapes. Through playful jousting, lambs find their place in the thinhorn scheme of things, which is far below the band’s leading older ewe.

As the nursery band moves onto summer range, lambs learn traditional travel routes and begin to eat more grasses, sedges and herbs. By the time they are weaned in autumn, they weigh 10 times as much as they did at birth.